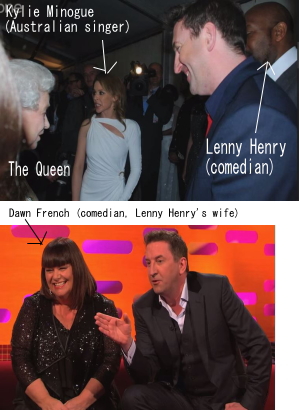 Graham Norton: Your obsession with The Queen… that you’ve seemed to have lived most of your life wanting to meet The Queen.
Lee Mack: Well it was… yeah, when I was quite young I saw, I saw the Royal Variety Show, and the comedian that was on had met The Queen, so I assumed that that meant you must be really funny to meet The Queen; you have to be… she says, “He’s funny enough to meet me,” I thought that’s how it worked.
Dawn French: Command you to be funny.
Mack: Yes, in the Royal Command Performance, they literally command you. So, I was… I had it in the back of my head that I should meet The Queen and then I can say that I’ve finally made it as a comedian.
Norton: But you did get to meet her, though.
Mack: Finally, this year and it genuinely was true that at the end of the book, I was trying to think of a way of ending the book, and I’d mentioned wanting to meet The Queen in the book, and literally as I was trying to finish it, I got a phone call to ask if I could do the Jubilee Concert this year (2012), and host it, and I thought, “This’ll be great; I get to meet The Queen.” And there was so much pressure, everyone… I mean we were all nervous about doing the gig but I was more nervous about ending my book, so I had to meet The Queen. Had to take a photo, and so then she’d come, and they chucked out everybody that wasn’t… it was such a small room, so the person who was going to take the photograph couldn’t take it, and she said, “I’m being thrown out, it’s just you lot that are in the show,” so she hands me the camera and I see Alfie Boe, the opera singer, and I go, “Alfie, mate, don’t mess this up. There’s the camera, make sure that when… you’ve got to get this shot.” I think, if you have a look at the shot, it’s not exactly what you would call… everyone’s in it. I’ll tell you what…
French: I recognize that bloke (her husband, Lenny Henry).
Mack: I was going to really change the whole story, that I didn’t want to meet The Queen; I always wanted to meet Kylie Minogue and Lenny Henry, then it might work. But, bless him (Boe), I didn’t give him much warning, I said “Press that button and hope for the best,”  and he did.
Norton: And did she talk to you, or you just met her?
Mack: She was great, actually, she was really… she did this thing with Gary Barlow (singer) and Kylie, it was her (Kylie’s) job to show her round everybody, and I think Kylie didn’t know who I was, panicked and just backed off because she didn’t want to introduce me, and so The Queen was left stranded on her own. So I’m making polite conversation with her and I saw The Queen looking round as if to say, “Usually I’m dragged away at this point but nobody’s come to get me.” So I said, “Are you staying at the Premier Inn with Lenny?” And she said, “No, I’m not doing that.”
Norton: And you met William as well, didn’t you?
Mack: I met William, yeah, that was… that was interesting because he was, he was really nice. He came up to me and he said, er, we get to go to the palace afterwards, and his opening line to me was, “You need to get some new jokes.” I went, “I don’t tell you how to be the future king.” He laughed, “I’m only joking, I’m a big fan of Not Going Out,” my sitcom, and I was so excited, and I was just about to talk to him, and Cheryl Cole started talking to him, and “Shh,” he was far more interested in her and I had to wander off. If I ever see that woman… oh she’s coming on.
Cheryl Cole:

Expressions used:
“I had it in the back of my head” means a subconscious thought.
To “make it” means to be successful.
A “gig” is a performance job, especially music, comedy, dance etc.
“Chuck” means throw, so to “chuck someone out” means to tell somebody to leave. “Throw out” means the same in this case.
To “mess up” means to fail, make a terrible error.
“Bless him” means “I don’t blame him; he did his best.”
“I went…” means “I said…”
“Wander off” means to go away without anyone noticing.