Here is another Eddie Izzard clip. This is from an old performance. He is not doing so much comedy these days as he is working on his campaign to become mayor of London. He certainly looks very different now! 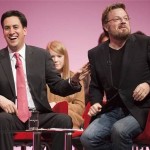 …And we built up empires… we stole countries. That’s what you do, that’s how you build an empire. We stole countries with the cunning use of flags. Just sail round the world and stick a flag in. “I claim India for Britain,” and they’re going, “You can’t claim us, we live here! Five hundred million of us.” “Do you have a flag?” “We don’t need a bloody flag, it’s our country you b******. ” “No flag, no country, you can’t have one. That’s the rules that I’ve just made up, and I’m backing it up with this gun that was leant from the National Rifle Association.” That was it, you know.

I think he adds some sentences ad lib in the performances, and they’re not always funny – like the gun comment. I think he mentioned it because he was in the USA.