This is a scene from Monty Python’s TV series (shown on screen at a break during their live concert at the Hollywood Bowl) in which we see a philosophy match of Germany versus Greece.
There is a funny Wikipedia page showing a match report, as if it were a real match: 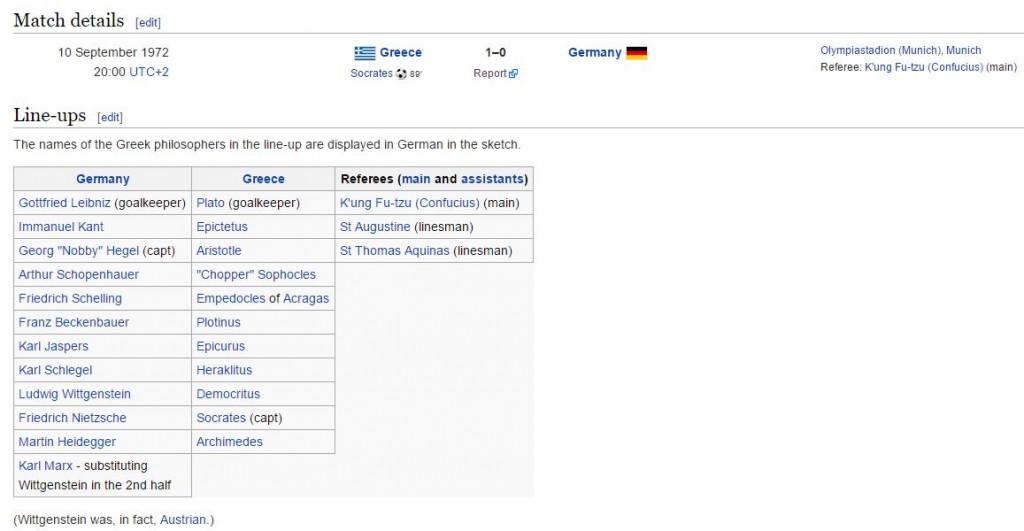 I didn’t need to transcribe this, as it was on the Wikipedia page linked as ‘Match Report’.

Football Commentator: Good afternoon, and welcome to a packed Olympic stadium, Muenchen Rueckspiel, for the second leg of this exciting final. And here come the Germans now, led by their skipper, “Nobby” Hegel. They must surely start favourites this afternoon; they’ve certainly attracted the most attention from the press with their team problems. And let’s now see their line-up. The Germans playing 4-2-4, Leibnitz in goal, back four Kant, Hegel, Schopenhauer and Schelling, front-runners Schlegel, Wittgenstein, Nietzsche and Heidegger, and the mid-field duo of Beckenbauer and Jaspers. Beckenbauer obviously a bit of a surprise there.
And here come the Greeks, led out by their veteran centre-half, Heraclitus. Let’s look at their team. As you’d expect, it’s a much more defensive line-up. Plato’s in goal, Socrates a front- runner there, and Aristotle as sweeper, Aristotle very much the man in form. One surprise is the inclusion of Archimedes.
Well here comes the referee, Kung Fu Tsu Confucius, and his two linesmen, St Augustine and St Thomas Aquinas. And as the two skippers come together to shake hands, we’re ready for the start of this very exciting final. The referee Mr Confucius checks his sand and… they’re off! Nietzsche and Hegel there. Karl Jaspers number seven on the outside, Wittgenstein there with him. There’s Beckenbauer. Schelling’s in there, Heidegger covering. Schopenhauer. And now it’s the Greeks, Epicurus, Plotinus number six. Aristotle. Empedocles of Acragus and Democratus with him. There’s Archimedes. Socrates, there he is, Socrates. Socrates there, going through. There’s the ball. There’s the ball.
Anchorman: And we’ll be bringing you back to this exciting contest the moment anything interesting happens.
Commentator: Well there may be no score, but there’s certainly no lack of excitement here. As you can see, Nietzsche has just been booked for arguing with the referee. He accused Confucius of having no free will, and Confucius he say, “Name go in book”. And this is Nietzsche’s third booking in four games.
And who’s that? It’s Karl Marx, Karl Marx is warming up. It looks as though there’s going to be a substitution in the German side. Obviously the manager, Martin Luther, has decided on all-out attack, as indeed he must with only two minutes of the match to go. And the big question is, who is he going to replace, who’s going to come off? It could be Jaspers, Hegel or Schopenhauer, but it’s Wittgenstein! Wittgenstein, who saw his aunty only last week, and here’s Marx. Let’s see it he can put some life into this German attack. Evidently not. What a shame. Well now, with just over a minute left, a replay on Tuesday looks absolutely vital. There’s Archimedes, and I think he’s had an idea.
Archimedes: Eureka!
Football Commentator: Archimedes out to Socrates, Socrates back to Archimedes, Archimedes out to Heraclitus, he beats Hegel. Heraclitus a little flick, here he comes on the far post, Socrates is there, Socrates heads it in! Socrates has scored! The Greeks are going mad, the Greeks are going mad. Socrates scores, got a beautiful cross from Archimedes. The Germans are disputing it. Hegel is arguing that the reality is merely an a priori adjunct of non-naturalistic ethics, Kant via the categorical imperative is holding that ontologically it exists only in the imagination, and Marx is claiming it was offside. But Confucius answers with the final whistle! It’s all over! Germany, having trounced England’s famous midfield trio of Bentham, Locke and Hobbes in the semi-final, have been beaten by the odd goal, and let’s see it again. There it is, Socrates, Socrates heads in and Leibnitz doesn’t have a chance. And just look at those delighted Greeks. There they are, “Chopper” Sophocles, Empedocles of Acragus, what a game he had. And Epicurus is there, and Socrates the captain who scored what was probably the most important goal of his career.