Viz is a comic in the UK that specialises in simple wordplay jokes. They have a series of one-picture cartoon playing with the word “thing”. They are using it here to apply to something that cannot be named, and they chose a kind of nameless monster to be called a “thing”.
This cartoon is playing on the term “There’s a few things I’d like to get off my chest.” It means that I have two or three problems that I would like to explain, or complain about. In this sense, the “chest” is the speaker’s heart. 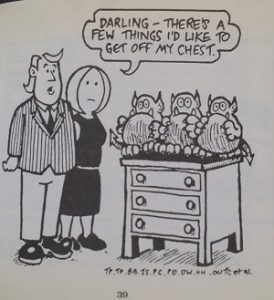