Gravy is a sauce poured hot over almost any meal, especially on ‘meat and two veg’ and roast dinners. It is the standard British accompaniment to dinner. As Christmas is coming soon, a LOT of gravy is being sold in the UK right now. Please see this post from my blog for a comedy video about gravy. 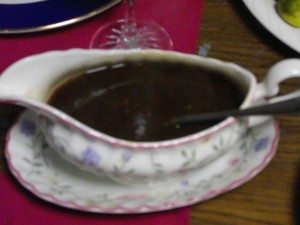 There are some idioms using the word gravy: “Gravy train” means getting paid for something that requires no hard work; an easy job. Perhaps the origin is from the US when gravy was once considered to be a luxury food, and a train was considered a relaxing way to travel – maybe! Example: “Your new job looks nice and easy.” “Yes, I’m riding the gravy train on this one!”